The Mechanics Institute was built in 1887, mainly by James Hall and William Hall. A number of letters addressed to Mr William Hall regarding the grants and maintenance of the Hall have recently come to light, indicating his hard work put in arranging these.

The original Trustees were members of the Hall, and of the Sharp and Smith families. In 1991 they included Benjamin Hall, James Smith, John Trewin, Thomas Roscoe, Thomas Sharp and A. Ridout, with William Hall as the correspondent. The land (between the Hotel and the Blacksmith Shop) was donated by the Hall Brothers, and the government gave a grant of £75.

All the original bricks were made by the James Hall family at the ‘Homestead’, and the builders were Artie Erwin and Bob Foote. The building took eight months to complete at the grand sum of £400.

The official opening was on Friday 14 September 1888, celebrated with a Grand Concert (by the Goorambat Star Minstrels) and a ball. The Grand Concert seats cost 3/- at the front and 2/- at the back, and an extra 3/- per couple for the ball which followed. The proceeds were in aid of the building fund, and after this no functions were needed to be held in the Goods Shed!

In 1891 the Hall was rented by the Education Department as a State School, no. 3123, until a permanent school building was erected in late 1907, opening January 1908. This photo was taken of the school in the Mechanics Institute circa 1900. 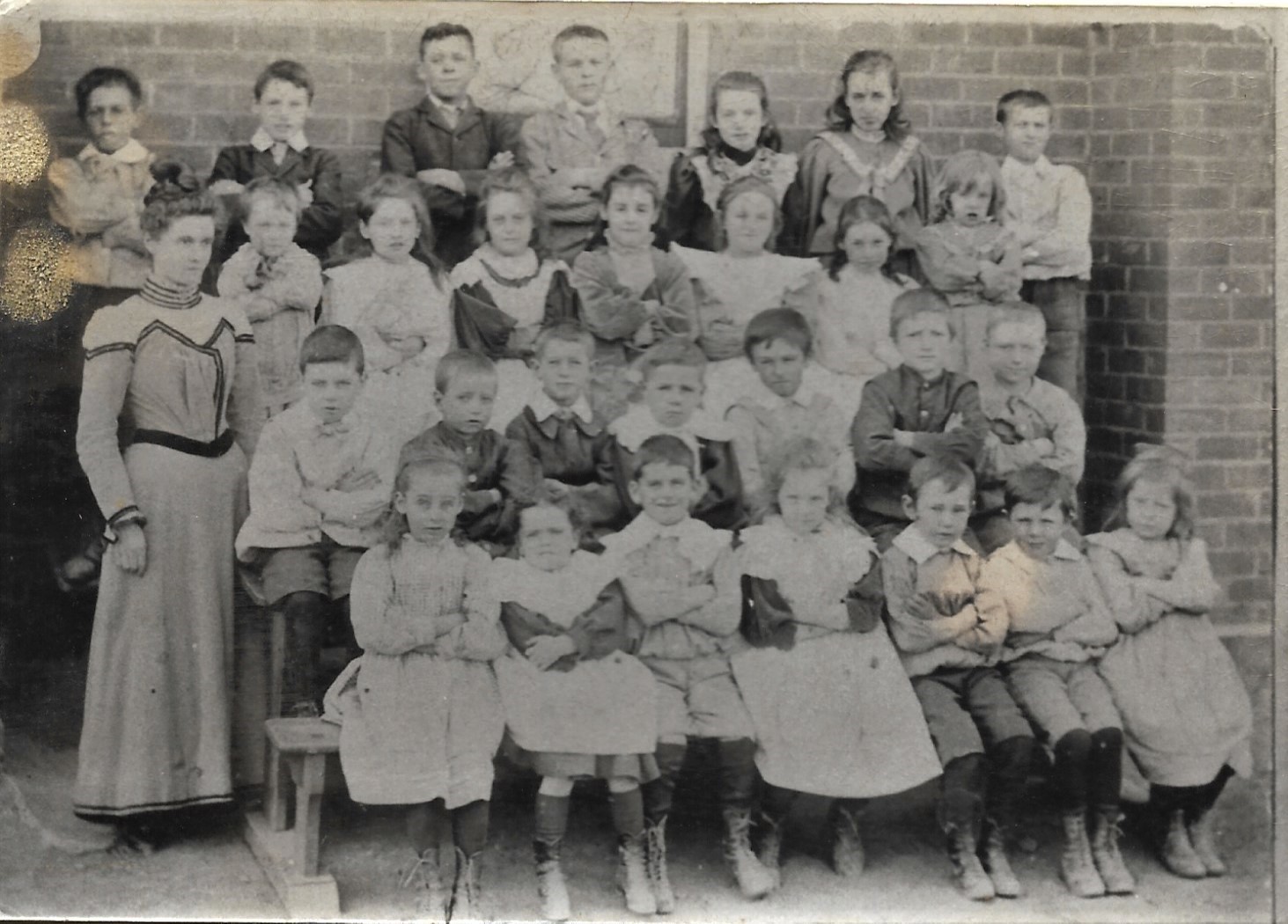 A public lending library was established in one of the rooms at the rear of the stage and a large number of the books were donated by locals as well as some purchases, and the library was still going strong at the start of the First World War in 1914, but the library was disbanded not long after due to lack of use.

Around the same time the Hall was used for roller skating, but this was abandoned when it started to ruin the floor!

In 1937 there were some extensions made to the rear of the Hall, when the whole building was renovated and repainted, and in 1931 a bio box was added at the front of the Hall so that it could be used as a picture theatre “the talkies”) whenever necessary, having already been used from about 1908 to show “the flickers”, which were the best efforts of the early portable travelling shows of the first moving pictures.

The Mechanics Hall has remained the social centre of Goorambat and district for most of the years to date, with the addition of the Supper Room, Kitchen and Toilets over the years. In 1934 the CWA asked the Hall Trustees to provide a set-in copper, sing and bench in the kitchen, with a second copper being applied for some time later so that one could be used for hot water at functions whilst the other could hold a cream can of milk coffee surrounded by hot water!

There are various commemorative plaques outside the hall as well honor boards inside, which are well worth taking a look at. A donation of £40 was given towards the Honor Roll listing those locals who served in the 1939-44 war by the CFA, and their members provided afternoon tea on the day of the unveiling of the board and opening of Victory Park.

Benalla Theatre Company has performed several times on the Hall stage in recent years, and the Hall has also been home to everything from pre-schoolers to bowls clubs and from dance groups to a variety of sporting clubs, as well as the CWA.

Ground for a children’s playground adjoining Victory Park was gifted to Goorambat, and the CFA donated £50 to the Shire President towards the playground equipment.

In 2017, Goorambat Hall celebrated its 130th Birthday in style…with a community meal and a magnificent cake! 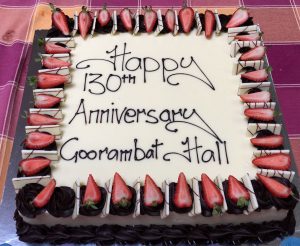 These days the hall is still in use but in need of a bit of TLC, and currently the toilets are being upgraded by the Community Group and the Trustees, with future plans being to reinstate the long-gone children’s playground. Solar panels are also planned for the roof, bringing the Hall into the 21st century.

Tim Bowtell is set to tackle another huge project - the Katamatite silos.   Benalla artist Tim Bowtell has been selected to paint the … END_OF_DOCUMENT_TOKEN_TO_BE_REPLACED

This page is still under construction. The Goorambat Solar Farm is currently due to start construction in 2022, with owners NEOEN already becoming … END_OF_DOCUMENT_TOKEN_TO_BE_REPLACED