One of the movable silos located in Dookie’s main street

A new committee to oversee the North East Art Trail has been formed with the aim of promoting art at Goorambat, Devenish, St James, Tungamah, Dookie and Katamatite.

Committee member and Goorambat resident Anne-Marie Greenway said with COVID-19 restrictions easing visitor numbers to the towns was set to increase and the committee in each town felt it would be a benefit to work together.

“We have members from all towns on the trail making up the committee,” Ms Greenway said.

“So far we have two representatives from each town. 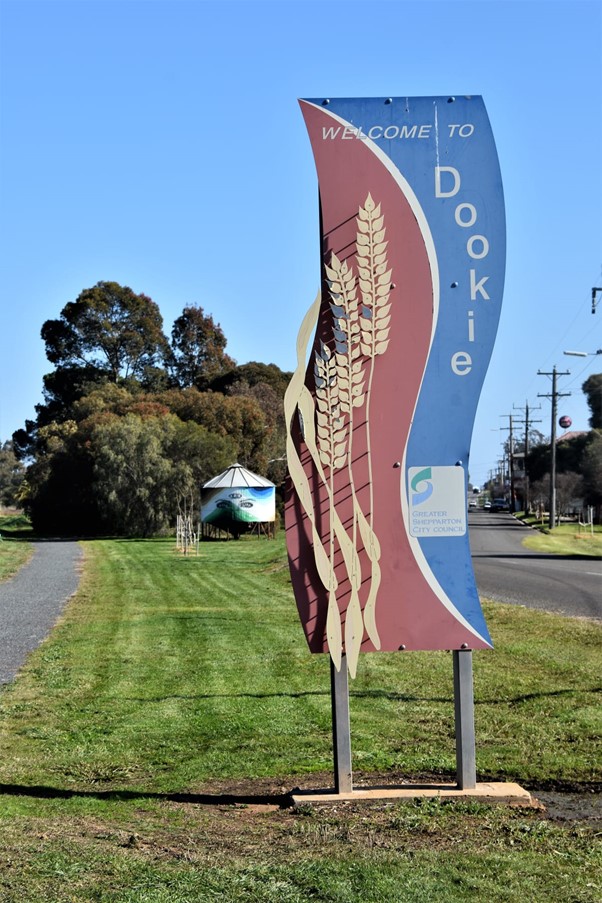 “We haven’t been able to meet face to face yet, but we are starting to get things moving.

“We are having a North East Art Trail website built, which will be online soon.

“We are really delighted as we think it’s great if towns work together rather than against each other.

“We are all great friends as well, which makes it a pleasure to be a part of. 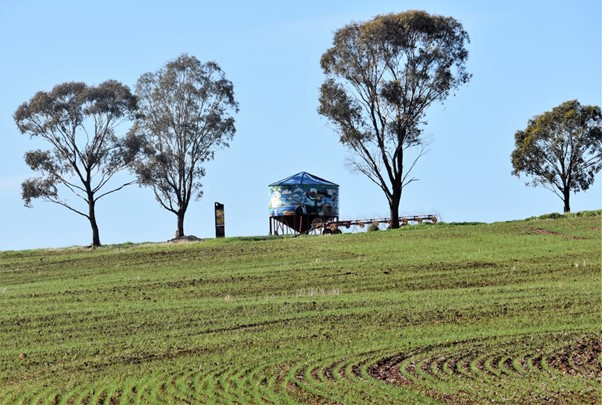 This silo is currently located at Tallis wines in Dookie

“We have been meeting up on zoom every month to make plans.

“We omitted the word silo from the committee as we plan to have other art installations incorporated into the group.”

Ms Greenway said they had recently incorporated Dookie into the group.

“What happened in Dookie is that they wanted their silo painted,” she said. “For a number of reasons that has not been able to happen.

“But they have six portable silos, which they opened on March 14 as part of the Shepparton Festival.

“And Dookie have an awful lot going on.

“They have some very committed community members.

“For example every month they do a 40-page newsletter, which looks at things like their Rail Trail and art installations.

“We’ve also got another on-board, which is Katamatite and we’re trying to help the raise the money to have their silo painted.

“GrainCorp have given them permission, but they have a deadline of the end of the year and we’re hoping to do a fundraising day with all of the silo towns opening up and all donating the proceeds to Katamatite.”

All local silo art towns have been actively discouraging visitors while the COVID-19 restrictions were in place, however, Ms Greenway said with those being eased they were, once again, welcoming tourists.

“There has been an increase since the restrictions have been eased and we are getting the caravans through again,” Ms Greenway said.

“Our local caravan park said they have lots of people booking, which is great for them as they’ve been shut for a while.

“And work has resumed on the installation of the toilet block we are having installed in Goorambat.” 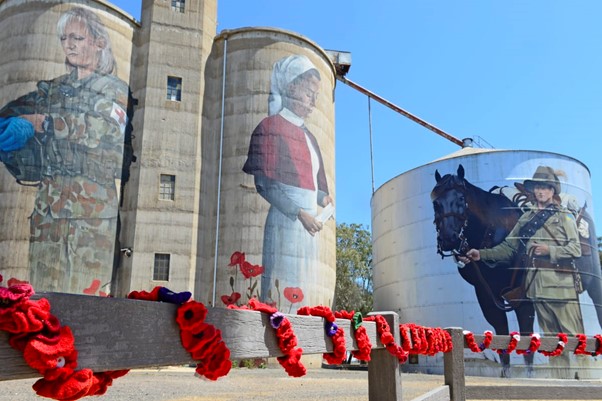 The silos at Devenish

There has also been a new calendar launched by a Western Australia-based silo art committee, which features silos in Goorambat, Devenish and St James.

Ms Greenway said because of the cost, the North East Art Trail committee would not be purchasing those in bulk to offer to visitors.

“The calendar is fantastic and features St James, Devenish and Goorambat,” she said.

“And the group who had that put together have arranged for 50 per cent of the profits to be split between the 14 towns featured.

“So we do encourage people to order one of those online to support the silo art towns.”

You can order a copy of that from www.australiansiloarttrail.com/store

Tim Bowtell is set to tackle another huge project - the Katamatite silos.   Benalla artist Tim Bowtell has been selected to paint the … END_OF_DOCUMENT_TOKEN_TO_BE_REPLACED

This page is still under construction. The Goorambat Solar Farm is currently due to start construction in 2022, with owners NEOEN already becoming … END_OF_DOCUMENT_TOKEN_TO_BE_REPLACED