New Website to Promote Art Trail and much more…

And www.nearttrail.org.au, while being a well of useful information for visitors, extends much further than simply highlighting our spectacular local silos.

Committee member Anne-Marie Greenway said the site was the reward for many months of hard work.

“With a lot of help from our web-host in Melbourne, we took the plunge and I did a crash course in WordPress,” Ms Greenway said.

“All the town representatives in our group forwarded text and photos, and then it was a matter of pulling it all together and keeping our collective fingers crossed it would be okay. 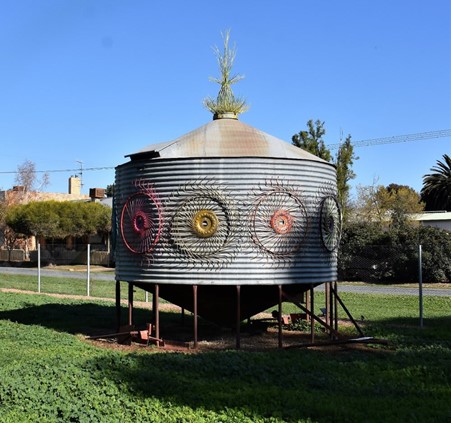 This moveable silo is located in Curtain St, Dookie.

“We have chosen to create links to businesses in these towns, especially the pubs and campsites.

“We also identified that a very large percentage of our potential site visitors would be travellers using mobile devices.

“So have angled our website to look best on those rather than just computer screens.

“It’s likely that people will be at, say, Rochester silo, and then log on to see where they might go next.”

And the site, while informing that decision, can also tell them some entertaining things to do on the way, and even after visiting their next stop.

“NEaRT was originally the brainchild of Benalla Tourism Officer Alison Angus, and designed to bring together the four small towns along the Oaklands Railway Line combining forces to work together,” Ms Greenway said.

“We soon realised that there is art out there of all kinds.

“Firstly, our Goorambat church painting, which is obviously not a silo. 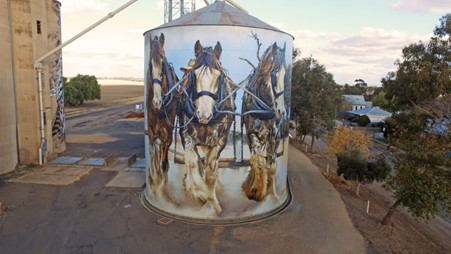 “Matt Adnate painted Sophia inside the Uniting Church in 2017 and she is still one of the biggest drawcards for Australian silo tourists.

“We have busloads of people booking talks and lunches through the church and the community throughout the year.

“With other large arts being painted in the area, and hearing that Katamatite had been granted permission to paint their silo, we decided to create a loop which could be started at any point by people coming in from any direction.

“At this point Dookie came on board to close the west side of the loop, with their amazing new nomadic silos, which went ‘live’ two days before we all went into lockdown.”

Two of the newer additions to the North East Art Trail are Katamatite and Tungamah.

“Tungamah have a set of privately-owned working silos and in fact had the very first one painted in the area in 2018, a few days before the Goorambat barking owl,” Ms Greenway said.

“They use Sobrane Simcock from Broome for all of their street art.

“And they have many walls painted by her around the town.

“She specialises in native birds, but does a wide variety.

“Katamatite have a silo just out of town owned by GrainCorp and have just recently received permission to paint it.

“They are now fundraising like mad in order to become part of the trail.”

A well-known artist has recently been approached to paint that silo.

Right now that person’s identity is a closely guarded secret.

Keep an eye out in next week’s Ensign for more about who that is.

One element of the new website which is sure to receive a few clicks is its “Country Pub Trail” section. 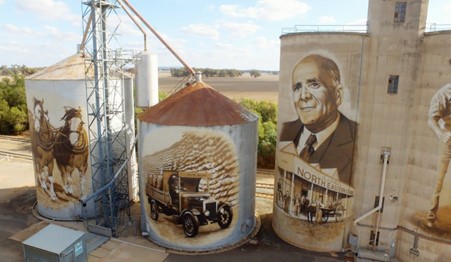 “In every small town there is a country pub, and they are usually the heart of the town,” Ms Greenway said.

“Goorambat, Tungamah, Dookie and Katamatite all have their pubs back up and running within restrictions, while the St James pub has brand new owners and even sports a Mexican restaurant.

“Devenish pub is undergoing a refurbishment and hopes to reopen in late November – there may not be a lot in each of these country towns, but there is always a cold beer and some great artwork.”

Ms Greenway also told The Ensign that there were a number of new art projects planned in the trail’s towns.

Keep an eye out in next week’s Ensign for more on those.

Tim Bowtell is set to tackle another huge project - the Katamatite silos.   Benalla artist Tim Bowtell has been selected to paint the … END_OF_DOCUMENT_TOKEN_TO_BE_REPLACED

This page is still under construction. The Goorambat Solar Farm is currently due to start construction in 2022, with owners NEOEN already becoming … END_OF_DOCUMENT_TOKEN_TO_BE_REPLACED